Award-winning creative and digital recruitment agency, Concept Personnel, has a new hand at the helm of its Newcastle Office.

Following its most successful year ever, Erin Kirtley has been promoted to Regional Manager, and will continue to drive the business forward in the North East and Scotland. Erin, 28, from Ashington, has been a key part of Concept’s team for the past three years, managing several key accounts. 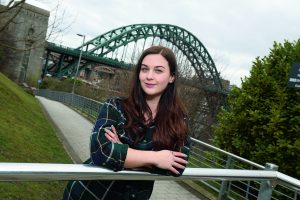 After graduating from Northumbria University with a degree in Interactive Media Design her first job was in-house as a Graphic Designer and Digital Marketing Executive before being placed by Concept Personnel at Cargo Creative as an Account Manager.

“My role at Cargo was client facing which gave me the opportunity to manage a variety of projects and work alongside designers and developers” said Erin. “Having worked within the creative industry I am able to advise candidates based on my own experiences whilst understanding the technical aspects required for the jobs in which we recruit.”

Firmly established as the leading digital and creative recruitment agency in the region, 2017 saw Concept celebrate its 15th anniversary and win a raft of new contracts with blue chip companies.

“Last year was an amazing year for the business,” said Jo Carter, MD of Concept Personnel. “This year we are looking to capitalise on that success by growing the business, opening our third office and making several new appointments. “Erin has been a key part of this success, and her promotion is well deserved. It marks the start of a very exciting time for Concept.”

Erin will head up the team in Newcastle, but will also manage the Scotland office which serves the thriving creative and digital industries in Glasgow and Edinburgh.“I’m really looking forward to getting started in my new role,” said Erin.

“We have a fantastic team in Newcastle who have all spent time working within creative, digital or marketing based roles. It is that extra bit of industry knowledge combined with our caring and personal approach to customer service that our clients really value.

“What sets Concept aside from other agencies is that we are not commission based or driven by sales targets. We are recruiters but from a different angle with different motives. It’s all about relationships and much of our success is down to long standing customers from companies that love what we do and the way we work.”